President Donald Trump enjoyed a major legislative victory this past week with the House of Representatives passing a bill that would repeal and replace Obamacare and, if the Senate and House can reconcile their differences over the legislation, the savings on health care spending could pave the way for a major tax cut stimulating the economy. While the high drama in Washington, D.C. dominated headlines, newly released data signaled that the economy may be stronger than expected. 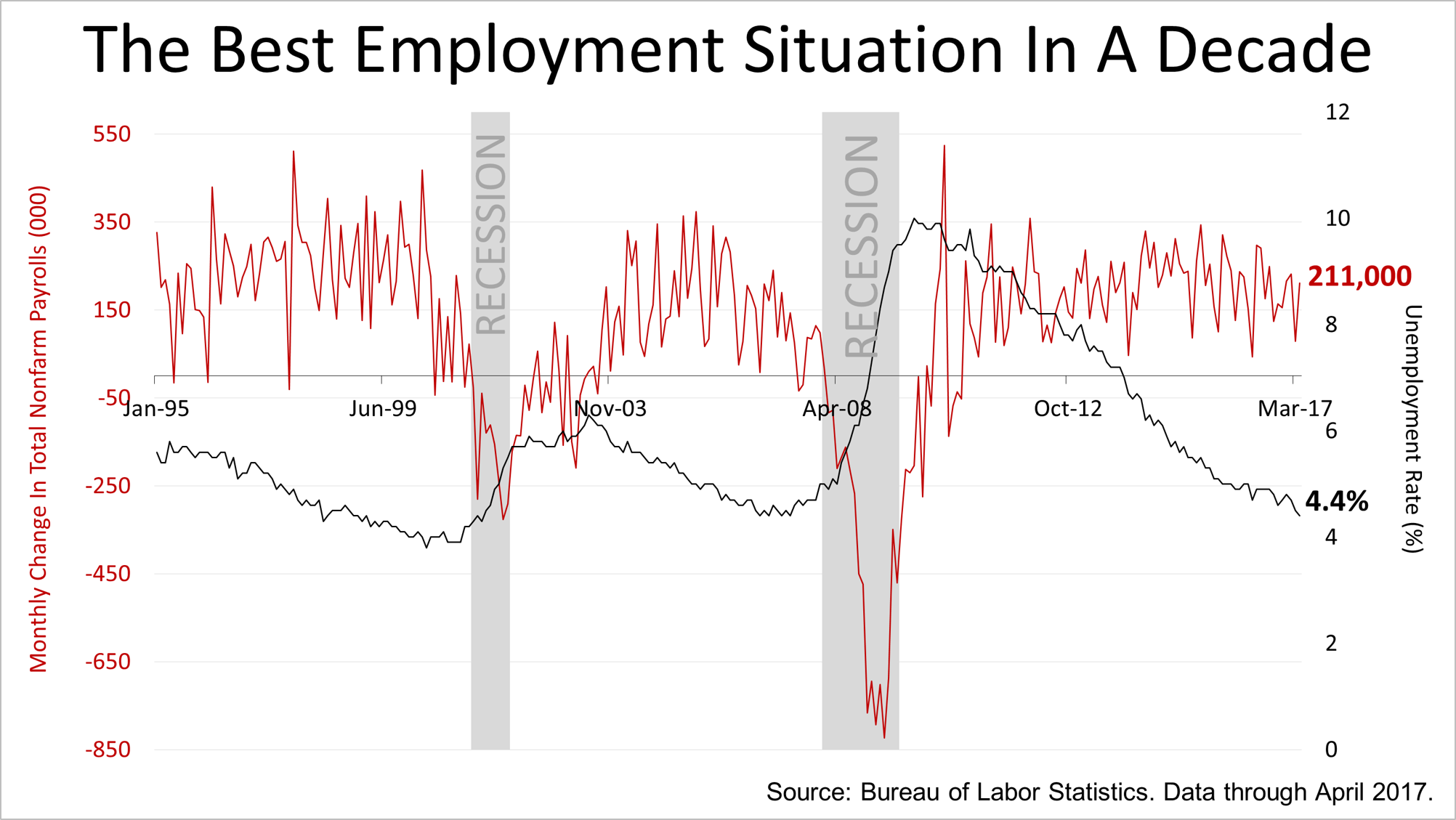 On Friday morning, the government reported that the employment situation has not looked so good in a decade.


The U.S. economy created 211,000 new jobs and the official unemployment rate dipped to a 10-year low.


The rate of unemployment was last this low at the peak of the last economic expansion. Joblessness has not dipped lower than 4.4% since 2001. 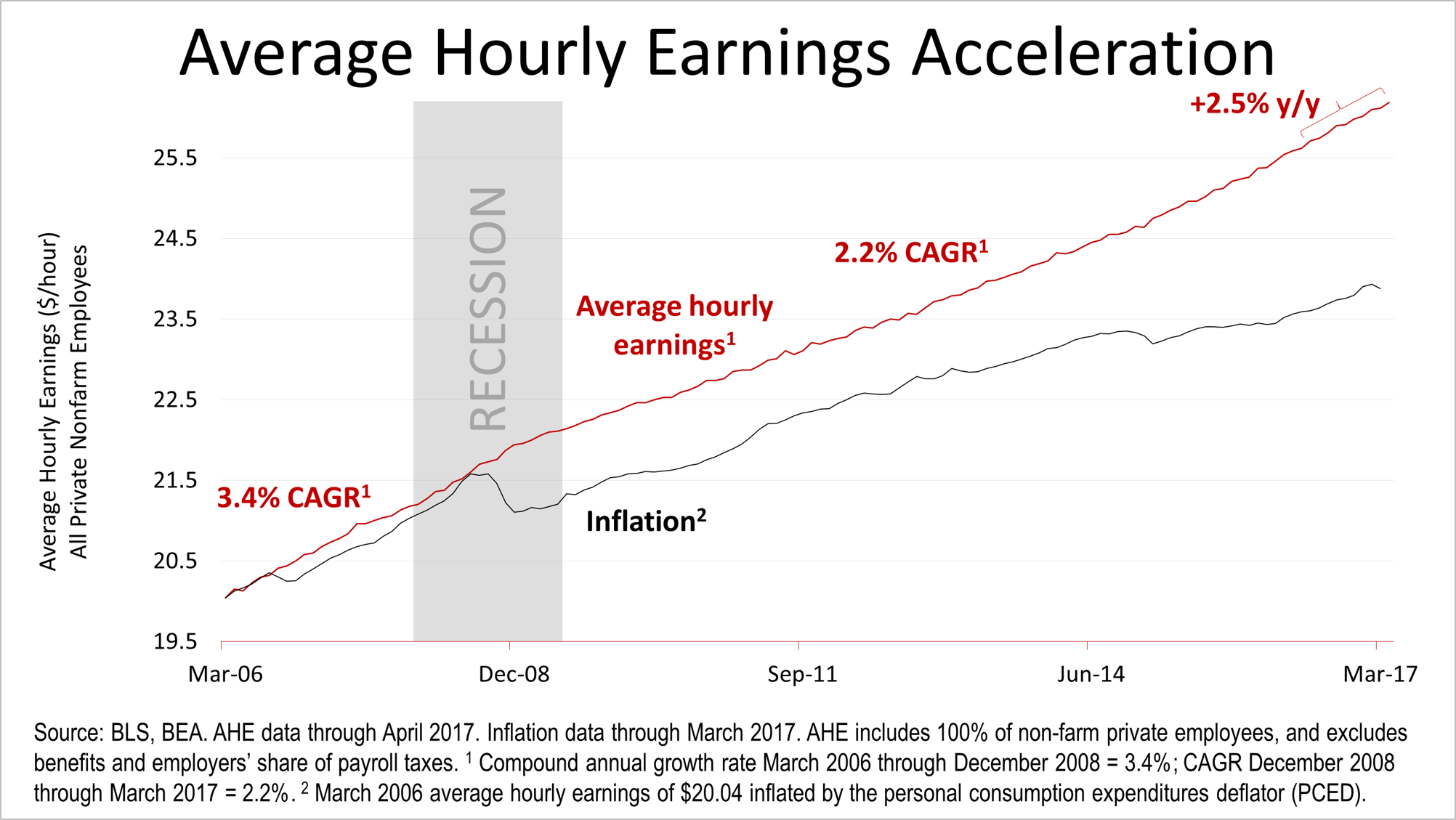 
While you will still hear many TV pundits and politicians talking about wage stagnation, it is a fiction. 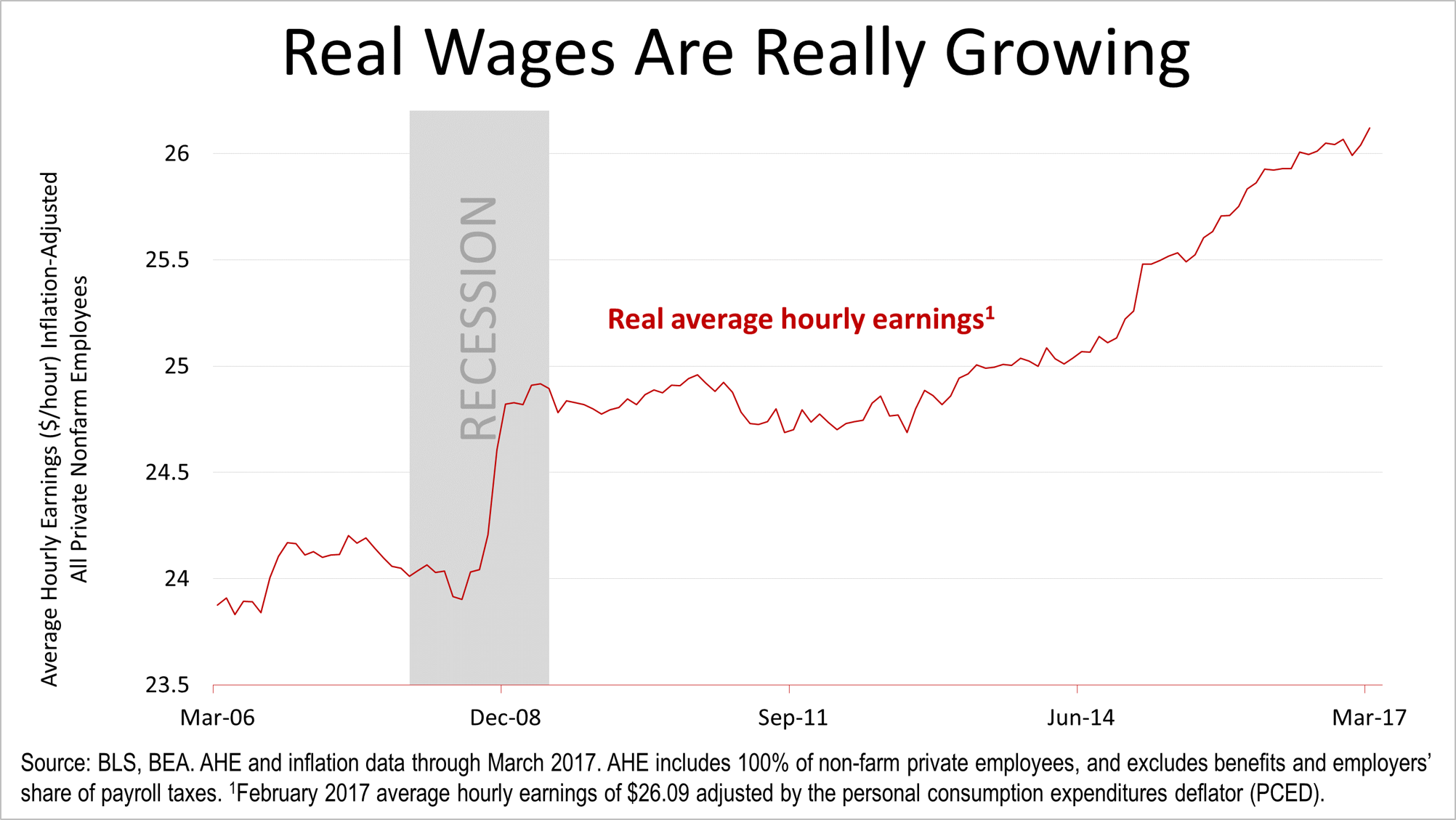 After the Great Recession ended in mid-2009, real wage gains - after inflation - were stuck through early 2014. Since then, real wages have risen significantly, from $24 to $26 per hour. 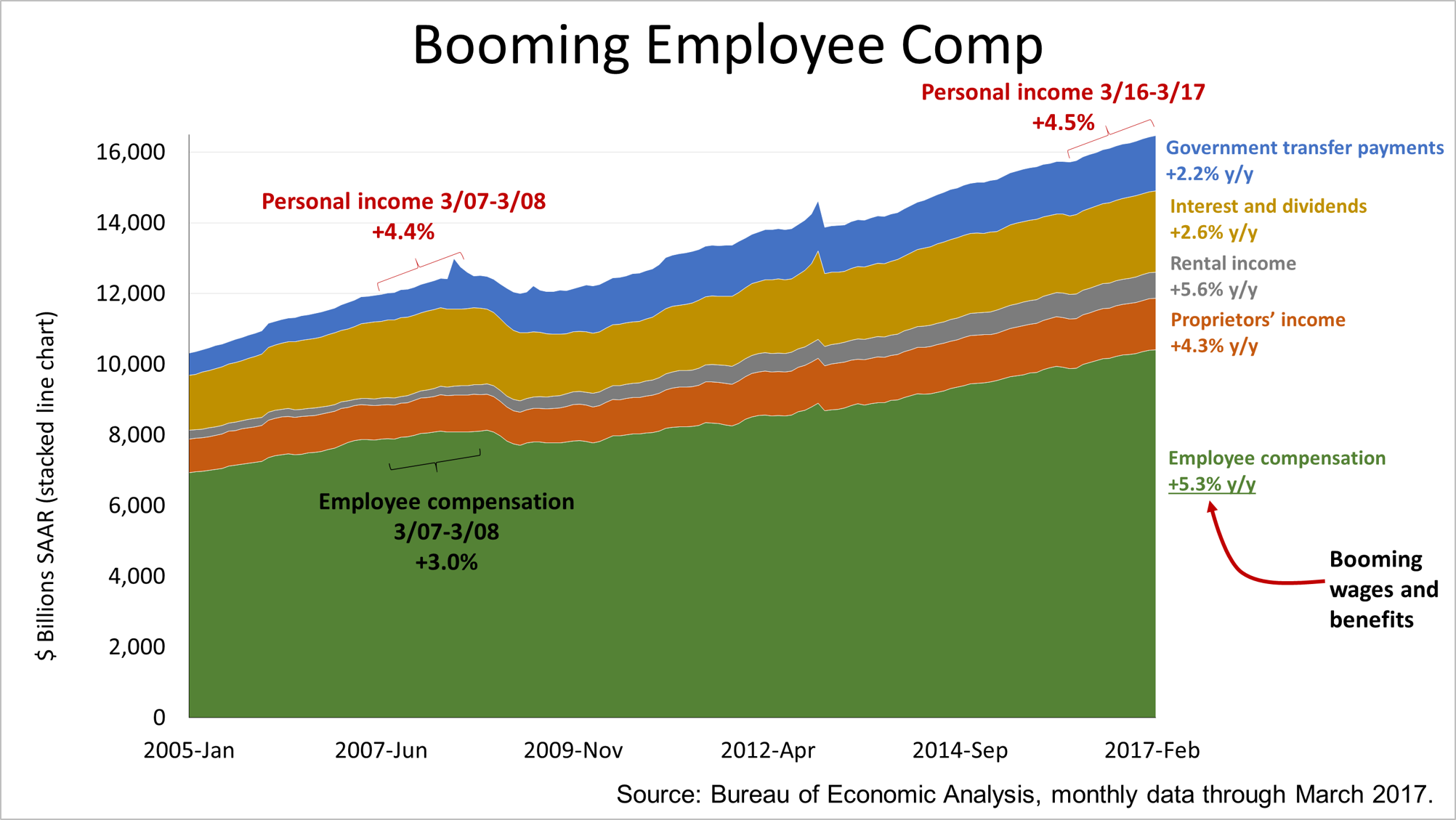 For most American households, real wages are the key determinant in their ability to spend. So, it is a good sign for the economy that year-over-year growth in employee compensation boomed at 5.3%.


The peak year-over-year growth in employee compensation in the last economic expansion was 3.3%.


According to a Bureau of Economic Analysis release on Monday, personal income rose 4.5% from a year earlier in April, which compares favorably to the peak level of 4.4% in the last economic expansion. 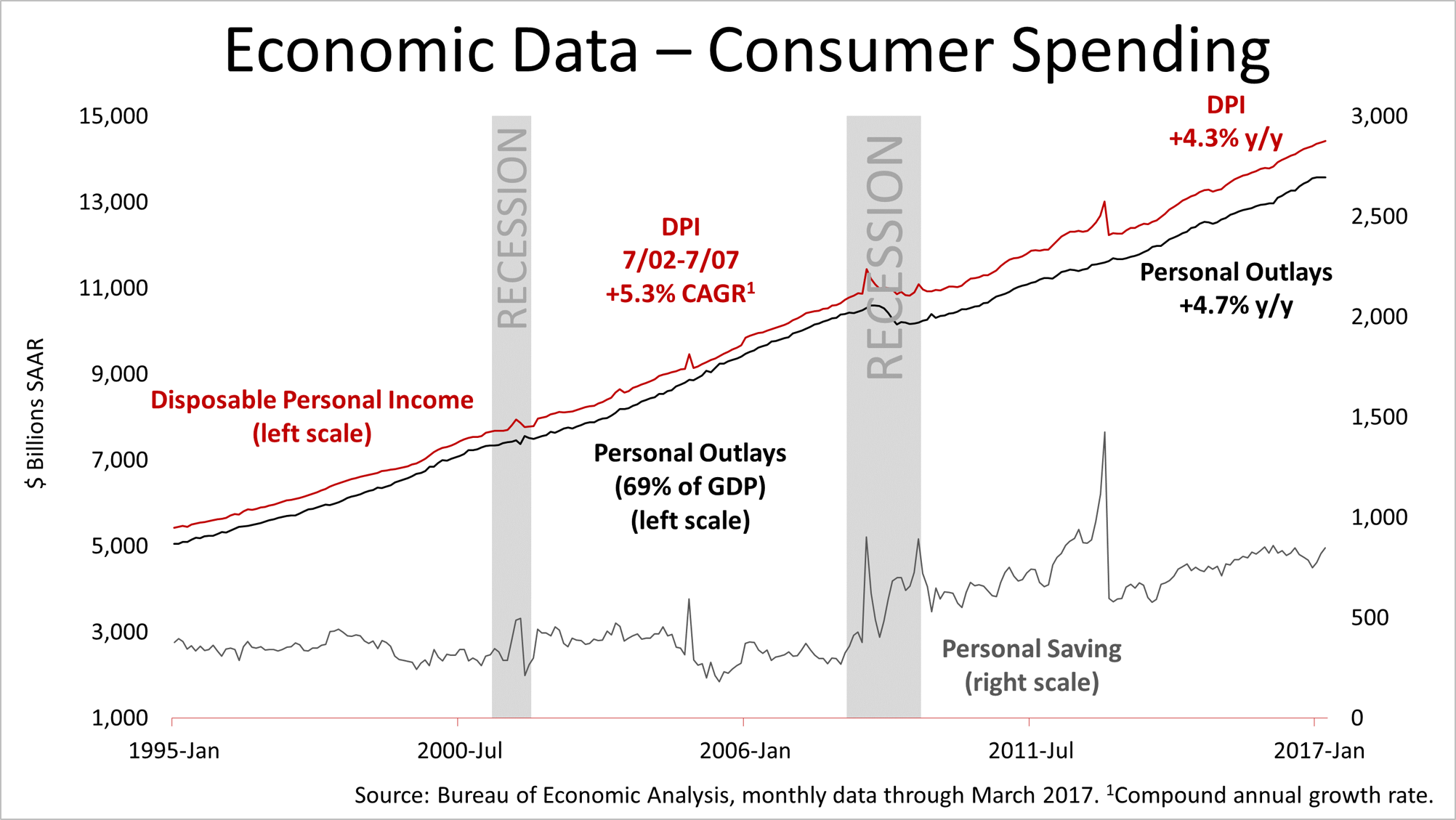 Meanwhile, the savings rate of 5.9% is quite strong. Compared to the period before the Great Recession, when Americans went on spending binge financed largely by debt, the savings rate has been high. For now, it seems like Americans learned a lesson in the last recession and are maintaining a materially higher savings rate. 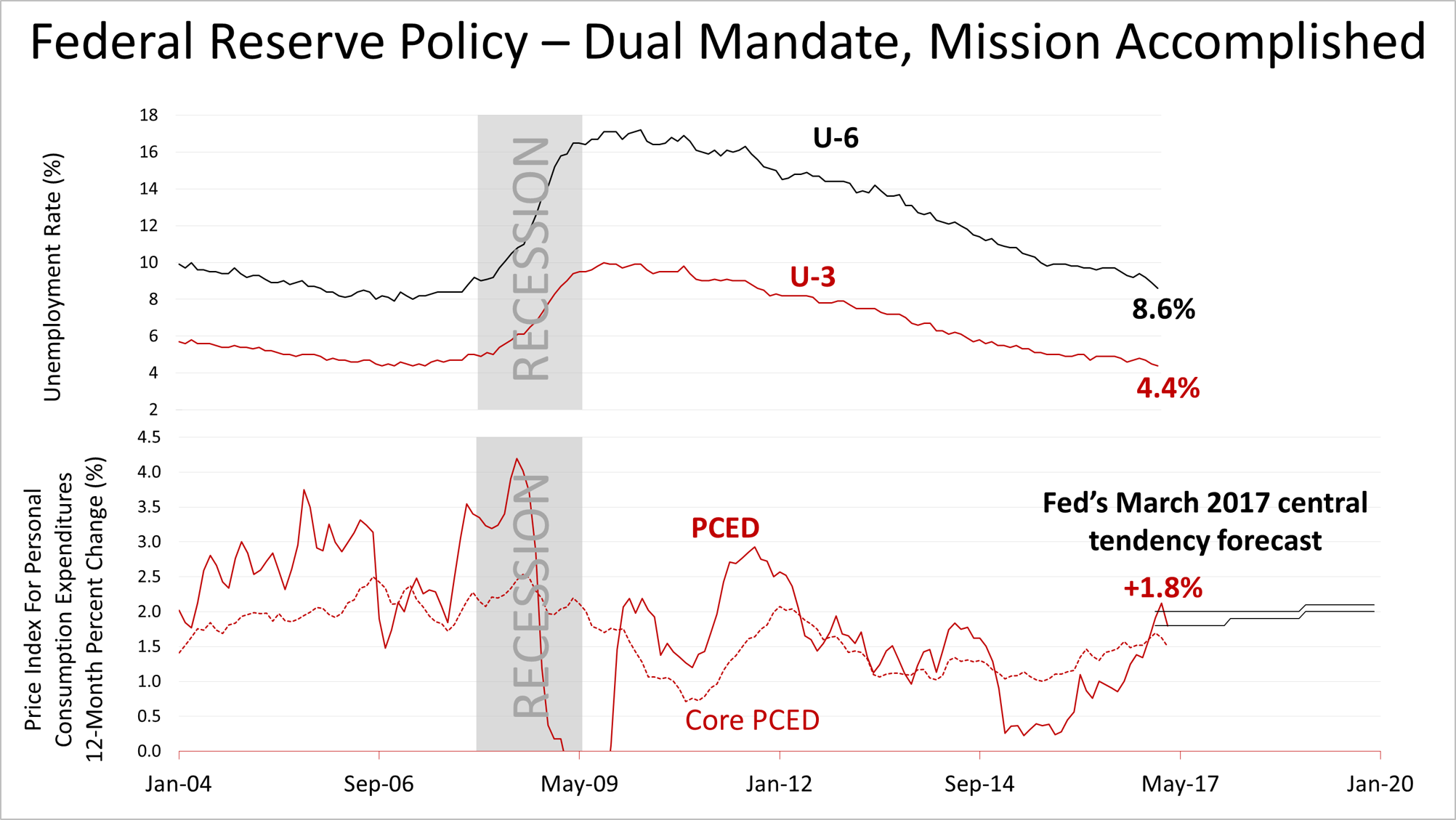 The U.S. Federal Reserve Bank is legislatively mandated with keeping inflation in check while encouraging growth in jobs. The U-3 unemployment index is the rate watched by the Fed in setting interest rate policy to stimulate job growth, and the Personal Consumption Expenditures Deflator is the inflation rate watched by Fed. These two key indexes are in line with recent Fed pronouncements, and that's good news.

The PCED inflation index had risen sharply in recent months but the Fed held off on raising rates despite the sharp increase. Last month's decline in this key inflation index confirmed the Fed's decision to hold off on an interest rate hike in March, and validated the Fed's outlook for gradually rising rates over the months ahead.

The Fed's dual mandate calls for policy designed to bring the economy to full employment with a 2% inflation target. At 4.5% unemployment (top panel), the economy has returned to full employment. Inflation (bottom panel), at +2.1% year/year, has recovered from the oil-depressed lows of 2015 and is now approximately at the Fed's desired 2%. 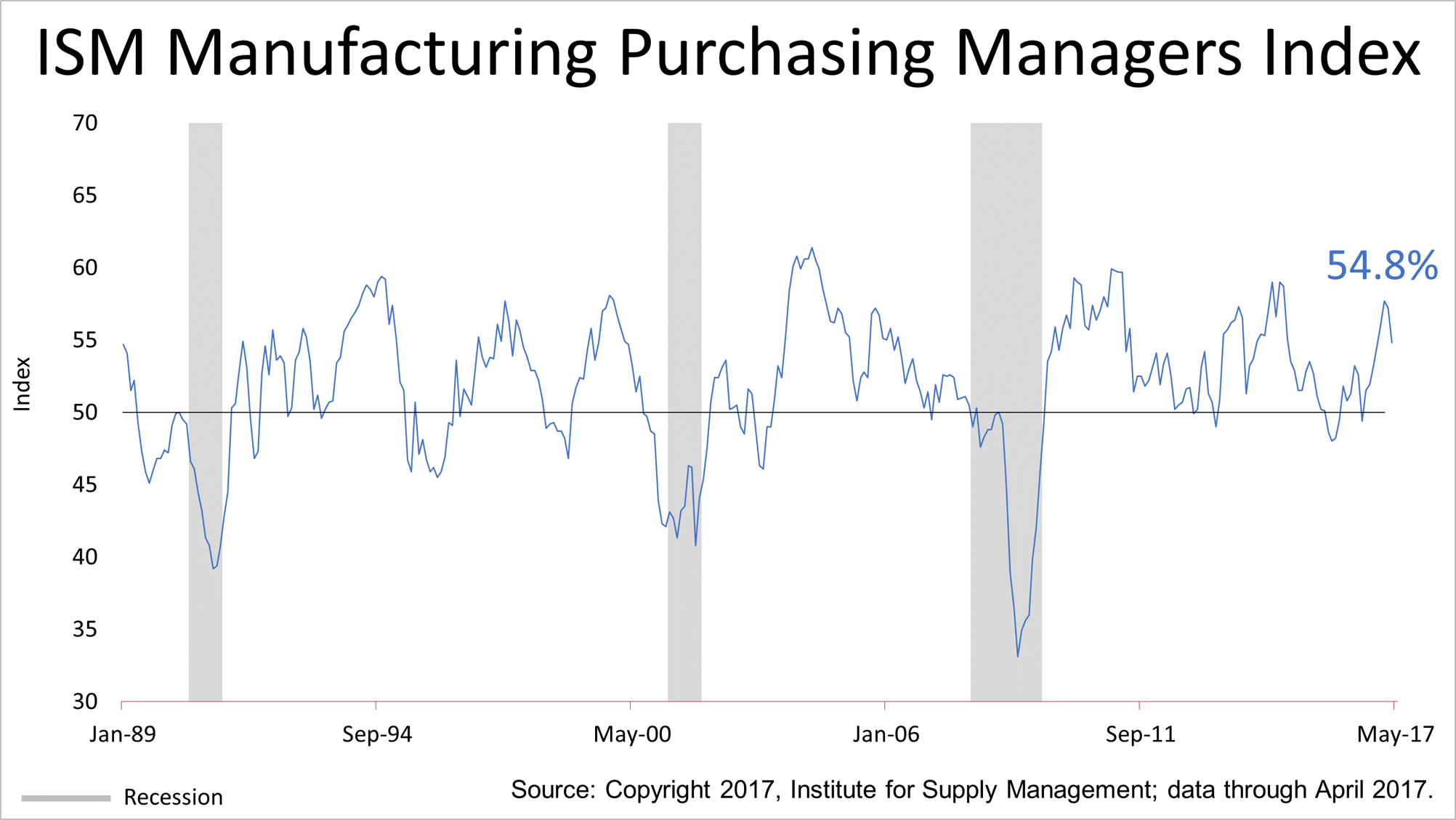 At 54.8% in April, the Institute of Supply Management's index of purchasing managers in the manufacturing sector remained strong. A reading of more than 50 in this index means the economy is continuing to expand, according to the Institute. 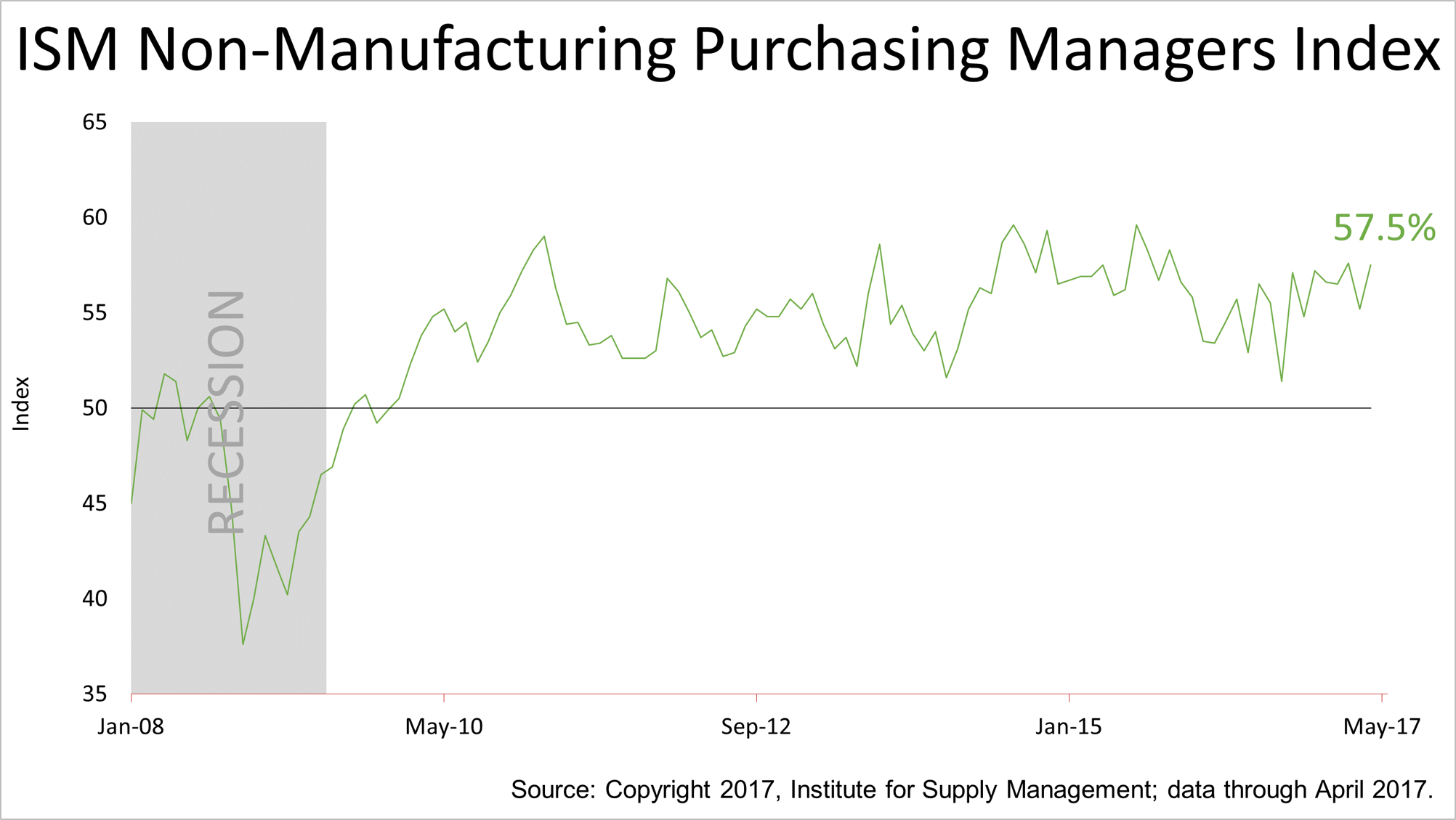 The Institute's survey of purchasing managers outside of the manufacturing sector, which accounts for about 88% of economic activity, came in last month at an extremely strong 57.5%. In addition, the new-orders component of the index, a forward-looking measure of economic strength, hit 63.2%.

This was important following last week's report that the U.S. gross domestic product for the first quarter of 2017 was just 0.7%. Some pundits had seized on it as evidence that slower growth is on the way. The strong new orders figure, however, indicates that that no slowdown is on the way. 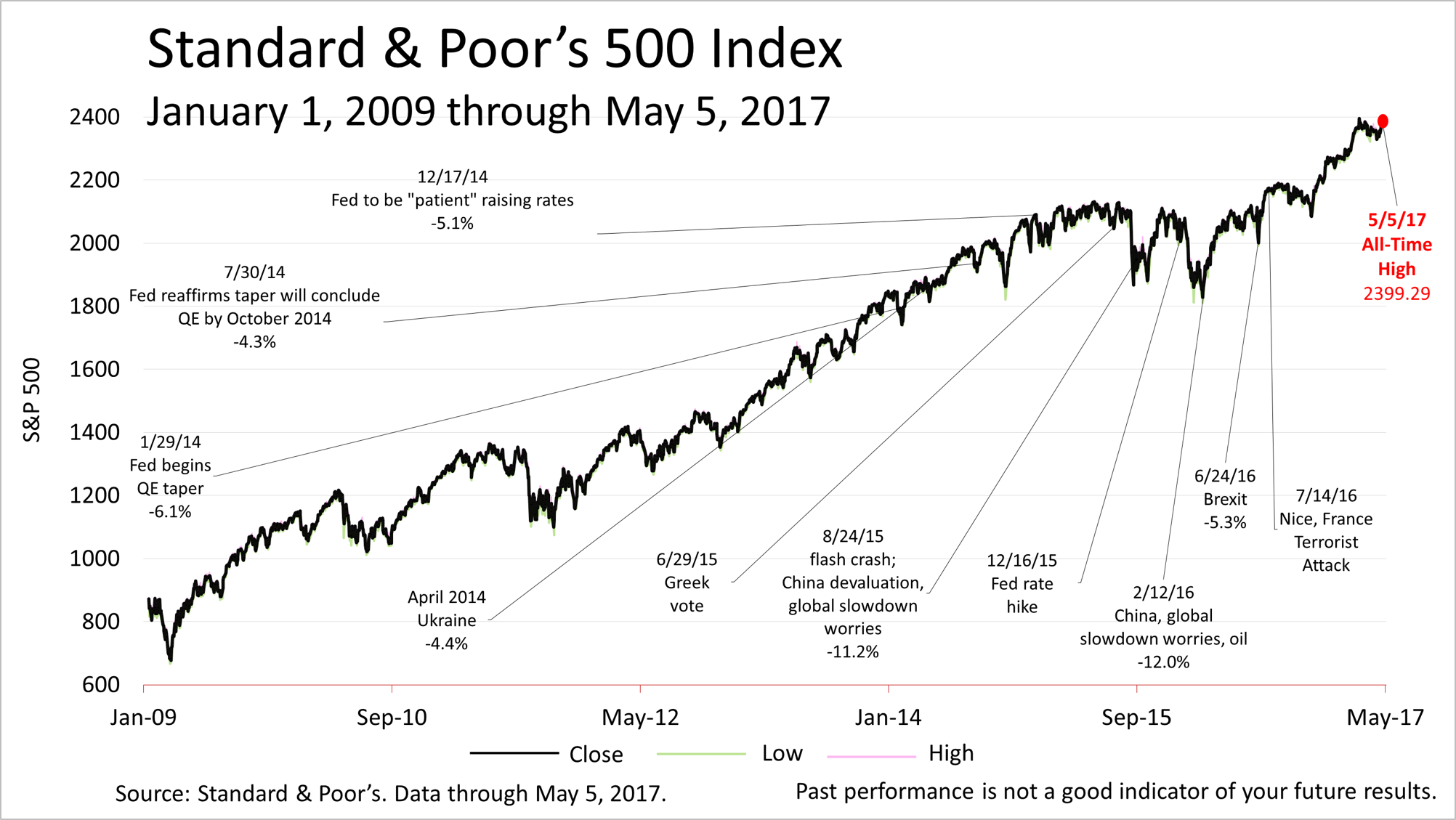 The Standard & Poor's 500 index closed at a new all-time high on Friday of 2399.29, up six-tenths of 1% for the week, based on all the good economic news. Stock prices have surged nearly 15% in the past 12 months and the economic expansion is now 94 months old.

If the Trump administration and Congress can get the health care legislation through the Senate without major changes, it would clear the way for a tax cut aiming to boost consumer spending, quicken the pace of growth in the U.S. economy and could boost stocks. However, that is by no means a sure thing, and stocks could decline if a tax cut does not get passed or if something else bad and unexpected happens. Still, the strength of the economy is continuing to surprise many investors and the outlook for accelerating growth remains intact, regardless of the outcome of political wrangling in Washington.

Concurrent with the release of January 2010 data, the CES program began publishing all employee hours and earnings as official BLS series. These series were developed to measure the AHE and AWH of all nonfarm private sector employees and the AWOH of all manufacturing employees. AE hours and earnings were first released as experimental series in April 2007, and included national level estimates at a total private sector level and limited industry detail.

Historically, the CES program has published average hours and earnings series for production employees in the goods-producing industries and for non-supervisory employees in the service-providing industries. These employees account for about 82 percent of total private nonfarm employment. The AE hours and earnings series are more comprehensive in coverage, covering 100 percent of all paid employees in the private sector, thereby providing improved information for analyzing economic trends and for constructing other major economic indicators, including nonfarm productivity and personal income.

U-3 Total unemployed, as a percent of the civilian labor force (official unemployment rate).